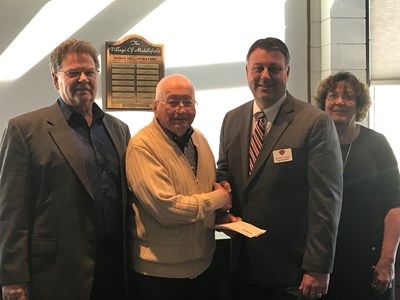 From the Cardinal School District Webpage

In the wake of an outpouring of support from the community and Cardinal Alumni, at least one Middlefield business is also pledging financial support to the school district. On Tuesday, February 14, 2017, members of Chem Technologies, Ltd. presented Cardinal Local School District Superintendent, Dr. Scott J. Hunt with a check for $60,000. The money will assist the district in securing a higher ending balance in their general fund budget at the end of fiscal year 2017.   Currently the District is projected to end the year with around $1,100 in the budget.

“I would like to express my deep gratitude to Jim Schill of Chem Tech for recognizing our need and investing in the future of the Cardinal Schools,” says Superintendent Dr. Scott J. Hunt. “Given the current financial situation of the district, this gesture speaks volumes to the importance of the relationship between the business community and the school community.”

Currently, the district has a ten year agreement with Chem Tech to receive a $6,000.00 annual tax abatement. The company offered to provide the payments to the district up front, instead of annually.

The eight-vote November 2016 levy loss  is forcing the district to make adjustments in order to avoid being placed in fiscal caution, watch, or emergency by the state of Ohio. The Board of Education has already voted on increases and changes to pay-to-participate fees for spring activities and more cuts to staffing and programs could be on the horizon to start the 2017-18 school year.

The district will have a 5.5 mill levy on the May 2nd ballot.  If passed, the levy would generate $1.7 million a year for the district. Monies would be used to pay employee salaries, benefits, and operational costs – it simply gives the district the money needed to continue to operate, as is, while maintaining local control.