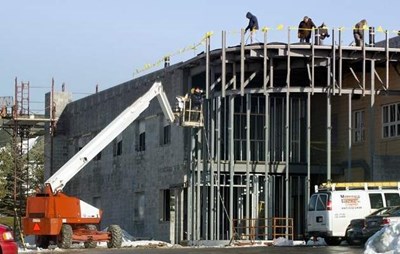 By Jean Bonchak, The News-Herald

Meet with Middlefield Village Mayor Ben Garlich for a few moments and it's obvious that the man's mind is keenly bent on business.

In fact, he says he takes it personally when an area business closes or space remains vacant for long.

The personal connection links to his roots in the village. He graduated from Cardinal High School, served as a village council member for 18 years and then as mayor from 1994 through 1999, and works as plant manager of Middlefield-based Dillen Products Inc.

Prior to taking over as mayor a second time in January 2012, Garlich said he witnessed a downturn in the village's business sector due to an overall decline in the economy. Adding to the sluggish commercial climate was what he termed a "janitorial" approach toward existing enterprises and a lack of active pursuit for new business.

Looking ahead, the mayor said "I really don't want to see an area that's impoverished."

Confronting the issue head on, one of Garlich's first acts as mayor was to establish an Economic Development Committee which he claims is comprised of individuals possessing strong abilities and a passion for business. The group, which does not receive a salary, quickly drafted an economic plan that was presented and accepted by council in March.

Local incentives relate to fees and taxes, infrastructure resources, revenue bonds and a revolving loan fund that provides financing for businesses through low-interest loans. A committee is currently being formed to administer funds.

"We're the only village that has a revolving loan fund," Garlich said. "You have to differentiate yourself."

The village's solvent economic status is a source of pride for the mayor.

"For a village of approximately 2,800 residents we do have a budget that probably exceeds most others of our size," Garlich said. "We are fortunate we are still home to several national and international companies providing local employment that far exceeds our resident population.

"Due to our village employee count our income tax collection is substantial for a village our size and gives us the ability to provide many amenities along with first class safety services."

Setting up an economic plan was an initial step in the village's efforts to sustain and spur business. Getting the word out was next.

A communications firm was hired to create a state-of-the-art website which Garlich said is frequently perused by neighboring community administrators. And banners proclaiming the oft-used slogan "Middlefield Means Business" were prominently displayed throughout the village.

Thus far the extensive efforts appear to be paying off.

Plans are in the works to annex 199 acres of prime industrial land for the expansion of Chem Technologies, Ltd.; ACE Hardware soon will be moving into a space that was vacant for almost five years; plans for a medical facility and bank are awaiting approval; a new restaurant and auto parts store have expressed strong interests to locate within the village; and a building formerly housing AMES department store is being eyed by potential occupants.

Art Ingold of E & H Hardware Group said the process of locating an ACE Hardware store in the village was facilitated through the mayor's office.