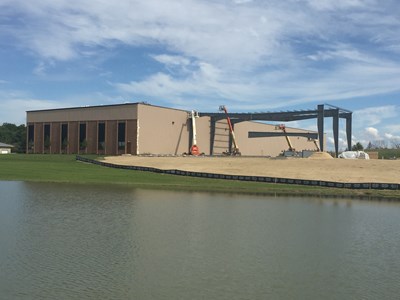 MIDDLEFIELD, Ohio- Chem Technologies Ltd. is doubling the size of its second plant in Middlefield with a 36,000-sq.-ft. addition and setting the foundation for future growth.  The second phase of the firm's seven-phase plan could house up to two more rubber mixing lines and will double the amount of floor space and dock capacity.

Randy Vancura, Chem Tech president and chief operating officer, said the firm has tripled its headcount to 96 over the last five year s with the future lines projected to continue to add jobs. "There is no limitation here," he said. "We're private. We've got solid investors and with solid growth, the world is our oyster so to speak. It's all about taking care of the customer at the end of the day-creating value and then getting those customers on and all of those customers we've maintained since the beginning."

The firm's second plant is designed to be built in seven identical 36,000-sq.-ft. phases. Chem Tech envisions a 277,000 sq.ft. facility, housed on a 589,000-sq.ft. plot of land, to be built out as business dictates. Vancura said Chem Tech owns more land east of the addition to add a third complex if needed. All the excavation work has been completed on the land where the third phase eventually will be built. Vancura said construction on that phase of the building can begin as business dictates.

"We engineered this down to the last molecule," he said. "We always know that we'll never ever say we're done. As the business grows for our company, we're committed to making that capital investment. That's not an issue." Phase two is being constructed, and Vancura said will be complete by year-end. Phase one was complete in the fall of 2015 and houses its eighth total and fourth mixing line. That line is now operational and, thanks to some additional enhancements, has the capacity for about 36 million pounds of rubber per year. The first phase also houses Chem Tech's ninth total and fifth rubber mixing line, identical to the eighth. Vancura said it will come online as soon as business dictates.

"We can run the new lines very efficiently," he said. "We get a lot of pounds out and we've added new pelletizing capability and sizing of the pelletization. Because we're private, we can develop things very
quickly. We don't have to go through a bunch of red tape; it's just a matter of where's the market, where's the customer. We're involved in all areas."

Chem Tech's seven other lines are housed at the company's 100,000-sq.-ft. Middlefield headquarters across the street from the expanding second plant. Four of the lines focus on blends for chemical dispersions, and the other three are fur rubber mixing.

Since 2013, Chem Tech has been quite busy. It added a new addition to its headquarters in 2013 for research and development along with a wing of executive offices.  At the same time, it broke ground on the first phase of its new building.

The firm serves a number of industries, focusing on high-value molded or extruded goods as well as medical, pharmaceutical and defense. The company mixes just about everything except silicone- ranging from all organics to both natural and synthetics. In addition to the expansion, Chem Tech has added a second laboratory mixer that has a greater capacity than the original.